On February 13, the 10,000th open access article was administered published in the year 2019 within the national agreements with publishers. It is the first time that this number has been achieved in a year.

Since the very first open access deal at the end of 2014, in addition to paying reading rights (Read), agreements have also been made about the settlement of open access publications (Publish) for researchers. As a result, researchers affiliated with a Dutch university no longer have to pay themselves when they publish open access in a selection of journals. This type of agreements have accelerated the growth in the number of open access articles in recent years. An overview of current agreements is published and monitored on openaccess.nl.

It is estimated that—the exact figures will be announced later this year—this will be around 25% of the total number of articles published in the Netherlands in 2019. Open access is of course achieved through other channels as well. For example, the number of open access publications that appear with full open access publishers and platforms is increasing. These routes are still outside the current national deals. Researchers and institutions also open their articles more often through their institutional repository, for example by making use of Article 25fa of the Copyright Act (Taverne Amendment). This clause in the Copyricht Act enables researchers to make publications freely available six months after publication at a publisher. The publications that are published in the repositories are also made available through the national portal NARCIS. The information in NARCIS is included in a number of international services, including Google Scholar and OpenAIRE.

All these actions have led to the percentage of 54% open access publications in 2018. 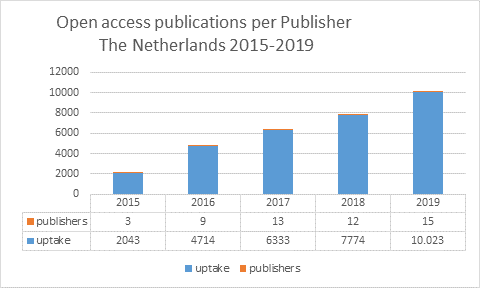