Two employees of Utrecht University Library, Jeroen Bosman and Bianca Kramer, have measured how many articles and reviews of researchers from Dutch universities have been published open access. They used the new available open access data from Web of Science and the online tool oaDOI. The results have been published as preprint in PeerJPreprints as part of a broader study. All used data are available via Zenodo. The data is available per university and the outcomes for 2016 provide insight into current developments.

The study shows that 42% of all peer-reviewed articles from the Netherlands and published in 2016 is available in open access. 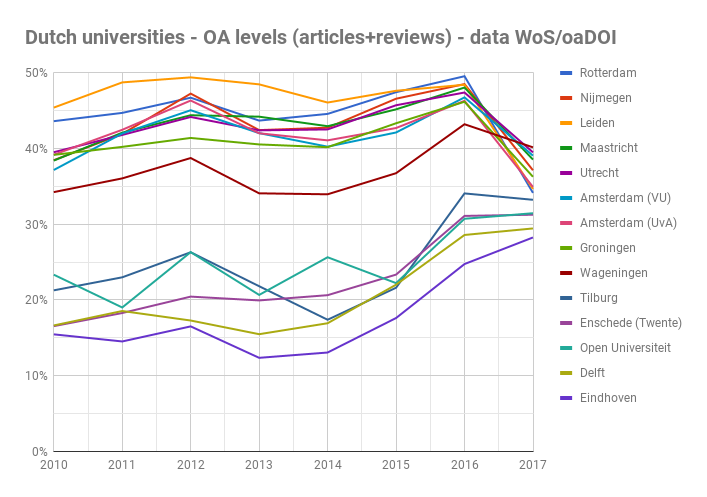 Most open access publications are openly available in the journal in which they are published (Golden route). The Web of Science data shows that a small percentage of open access articles (around 5%) are only freely accessible via the Green route. This usually means that an author's version has been made available in for example an instutional repository. In the study it is noted that in Web of Science not all green open access articles are indicated as such, on the one hand because authors' versions before peer review are not included, on the other hand because it is still unclear whether all institutional repositories are properly harvested by, among others, the oaDOI tool.

The study also looked at the distribution of different forms of Gold open access: Gold in fully open access journals, in Hybrid journals, and the relatively new category: Bronze. The results show that this last category is a considerable part of the total per institution. Bronze open access stands for freely accessible articles without a adequate license to share them. For example, these can be journal issues that are made freely accessible over time, or articles that are temporarily released. 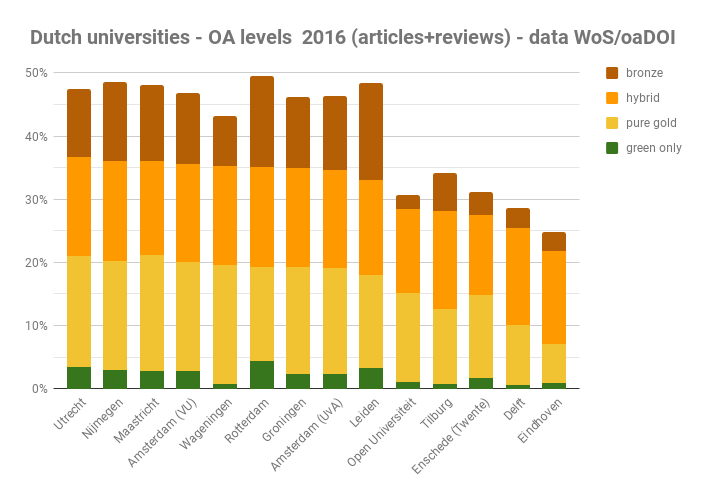