On this page, openaccess.nl offers current and factual information about Plan S.

In September 2018, Plan S was launched by cOAlitie S, a coalition of 27 science funders to accelerate the transition to open access. In the Netherlands, NWO (including ZonMW) is a member of cOAlition S. 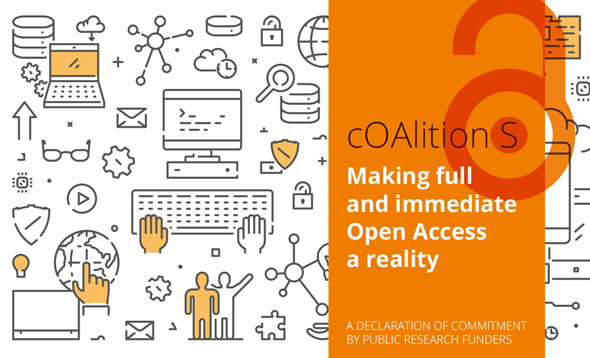 What is Plan S?

Plan S is an initiative of cOAlition S, a consortium of funders that wants to accelerate the transition to open access. Plan S requires that all publications arising from research that is funded by affiliated research funders are made available open access, without embargo.

The aim of cOAlition S is to boost the transition to open access by uniting different research funders. The publication conditions for researchers will be aligned as much as possible, with open access as golden standard.

The full objective of cOAlition S: “With effect from 2021*, all scholarly publications on the results from research funded by public or private grants provided by national, regional and international research councils and funding bodies, must be published in Open Access Journals, on Open Access Platforms, or made immediately available through Open Access Repositories without embargo.” (website cOAlition S)

Read more about the principles of Plan S on the site of cOAlition S.

Who does Plan S apply to?

It is also expected that the European Commission (H2020 and successor Horizon Europe) and the European Research Council (ERC) will align with Plan S in their guidelines.

When do the Plan S guidelines take effect?

The implementation of Plan S can vary per participating organization. In the Netherlands, NWO (including ZonMW) has indicated that the principles of Plan S will apply to calls that will be opened from January 1st, 2021. For Dutch researchers, open access will become the standard for all publications arising from projects awarded funding by NWO from 2021. For the EC funding programs, the new conditions will take effect with the start of the new framework program (Horizon Europe).

How can I meet the requirements as stated in Plan S?

For publications resulting from calls that will be opened from January 1st, 2021, they must be available in open access immediately (without embargo) and with an open copyright (CC BY) license. This can be done according to one of the following routes:

* to make this possible for researchers, cOAlition S developed the Rights Retention Strategy.

Does NWO have specific requirements?

Since 2015, NWO has had a policy that publications arising from its funding must be available open access. In July 2020, NWO announced how it will implement the new requirements of Plan S. These are contained in the document 'Implementation of Plan S', which will become an integral part of the NWO subsidy scheme from January 2021. With this policy rule, NWO elaborates on the implementation guidelines (Guidance to implementation) of Plan S as published by Coalition S on 31 May 2019.

How do I know if the magazine of my choice complies with Plan S?

CoAlition S will develop a Journal Checker Tool that informs researchers whether a journal meets one of these requirements and what options researchers have if it does not. The beta version of this tool is available now.